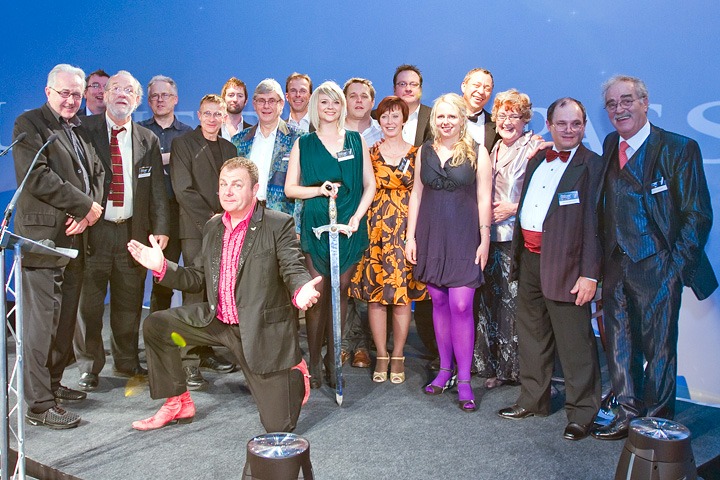 The Knight of Illumination Awards, organized by ALD, STLD and Clay Paky, have now become an unmissable event for the whole show lighting business. They are the only awards, entirely devoted to lighting designers, to provide public recognition of the best works in the theatre, touring and TV sectors.

The final act of the event takes place during the PLASA Show, and gathers together a large number of lighting designers, trade associations, production companies, rental companies, dealers and the press, in other words the leading “players” in the entertainment sector. It is a special occasion for a precious mutual exchange of professional expertise, as well as a time for celebration for lighting designers.

Once again the evening was held in the Enterprise Suite, Hotel Ibis, Earls Court, London, on 12 September 2010. The organizers set up a rig of great scenic effect for the event, mainly using the new Alpha 700 and Alpha 1500 lights. 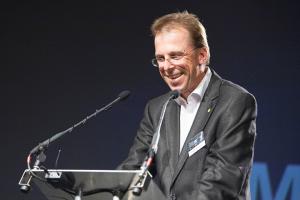 The chairmen of the lighting designers associations Rick Fisher (ALD) and Stuart Gain (STLD) emphasized this fact: “This year, like never before, we realized just how much the Knight of Illumination Awards are looked forward to and loved by people in the business. Our task actually started several months ago, with the selection of the shows, followed by the assessment of the nominations and, lastly, the choice of winners. This evening is simply the final act of a meticulous and dutiful study of many shows, carried out by panels consisting exclusively of sector professionals in order to guarantee full assessment credibility.”

Clay Paky Sales and Marketing Director Pio Nahum was also visibly satisfied: “The event has now entered people’s hearts. We realized this from the ovations the winners received. It was like being at a football stadium. Quite unlike the sober composed atmosphere one might expect!”

The evening started with a welcome aperitif, followed by dinner with live background music and a mix of lighting and video effects to entertain guests pleasantly and gradually involve them emotionally in the atmosphere of the evening.

Paul Ross, the brilliant master of ceremonies, presented the climax of the evening and proclaimed the ten new “Knights of Illumination”: four for TV, 3 for the theatre, 2 for Rock and a special lifetime recognition award, chosen from among the 27 nominations by a panel of highly specialized judges coordinated by the two British associations ALD and STLD. Each winner received a prestigious trophy: a replica of a real sword made in Toledo, Spain. The sword is a precious copy of those used by medieval knights.

The fair sex featured highly this year both among the representatives of the associations and winners. The chairpersons were Paule Constable (for the theatre), Sarah Rushton-Reed (for rock) and Ian Dow (for Television), and among the winners there were no less than three ladies including Coral Cooper, winner of the prestigious lifetime recognition award.

The VIPs present at the evening included Roberto Vagni, Economic Attache’ at the Italian Embassy in London.

After the awards were presented, there was a short ceremony during which a donation was made to Light Relief, an important non-profit association well known in the show lighting business. Pasquale Quadri, the President of Clay Paky, put the cheque into the hands of Matthew Griffiths, John Simpson, Rick Fisher and Lesley Harmer, the trustees of Light Relief, who publicly expressed their appreciation for Clay Paky’s gesture of awareness towards the needy in our sector.

PLAY – Peter Mumford for “Sucker Punch” at the Royal Court

The winner for Lifetime Recognition is Coral Cooper