The 4th Knight of Illumination Awards16 November 2010Next 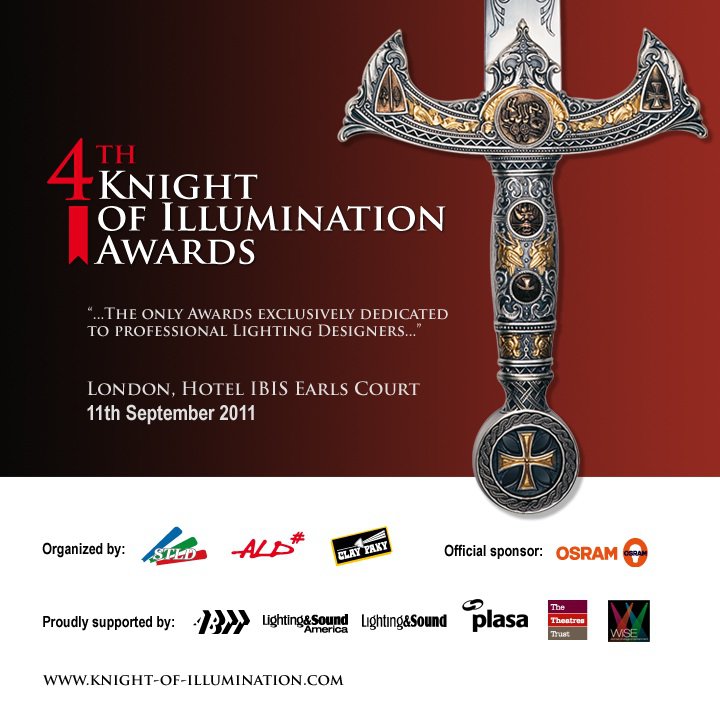 The Knight of Illumination Awards has extended the deadline for entries into its lighting design awards programme until June 30 2011 (for TV applicants only, entries close on May 31).

Currently in its fourth year, the Knight of Illumination Awards was established to recognise the talents of lighting designers working across the creative arts in the UK. Past winners include Bernie Davis, Baz Halpin, Cate Carter, Dave Davey, Al Gurdon, Andi Watson and Paule Constable.

The Awards are the only programme dedicated exclusively to the stage lighting designer’s craft in the UK, and, in all likelihood, the only competition in the world where winners receive an authentic medieval battle sword – crafted in Toledo, Spain.

Neil Austin, who received his ‘knighthood’ for work on the London-staged musical, Parade, said: “The Knight of Illumination Awards are the gold standard. They are the only awards to honour lighting design in all disciplines and at all levels of the industry. All entries – whether from fringe, regional or national level – are judged by people who’ve actually seen the shows.”

Designers can nominate their own work online at knight-of-illumination.com, or be nominated by a third party such as an agent or a member of the production team.

Entry is free and open to any UK-based lighting designer in the following categories:

The winners will be announced at a ceremony on 11 September 2011 at Ibis London Earls Court Hotel, 47 Lillie Road, London. For further details or to nominate an entry, go to www.knight-of-illumination.com. Deadline: 30 June 2011 (for TV applicants only, entries close on May 31).

Testimonials from past winners

“To go to the Knight of Illumination ceremony is exciting in itself, but to get nominated for an award in front of such company is one of the greatest honours I have ever received.”
Bernie Davis, TV Event, Festival of Remembrance.

“It’s always a bit of a battle to fight one’s corner as an LD and get the time and resources we need. So, being nominated for one of the industry’s only professional lighting design awards helps bring an extra bit of ammunition to that battle. Whether on a web site, CV, or in a production meeting, it does add a little more weight and respect to one’s professional standing.”
Michael Hulls, Dance, Eonnagata

“There is something about being awarded a Knight of Illumination award that has made me feel that we as a community of lighting designers are heralding our cause and making what we do more visible to others in the business. Our skills need more recognition and this award has helped me feel that all the hard work and time away from the children is recognized, respected and appreciated.”
Lucy Carter, Dance, Chroma

“I have to admit, I was a little reluctant to enter the Knight of Illumination Awards, thinking that my show stood no chance against the big TV spectaculars that seem to win the plaudits in these kinds of events. But with encouragement from my gaffer, and a fellow LD who had seen the show, I put together an entry (and won).”
Mark Smithers, TV Light Entertainment, Mission 2110

“Having received some other awards, there is none that even comes close to being as beautifully crafted, impressive, heavy, and downright shiny as the Knight of Illumination Toledo Sword. Getting it validates the hard work that you put into a production, and shows that you have the recognition of your peers. It adds an impressive look to your CV or website, and lets potential clients know you work at the highest level of your profession.”
Al Gurdon, TV Event, Royal Variety Performance

“The Knight of Illumination awards gave me the chance to put forward a show that I felt deserved a closer look. I knew that the judges would look at the show and take account of how it was produced rather than how many people actually watched it. Winning a sword was a source of great professional pride and it gave me confidence that the work I was producing was up to the craft standards that I aspire to.”
Iain Davidson, Television Small Studio, Theatre Live: The Turning Point

“What a true pleasure to be recognized by one’s peers and a panel of distinguished theatre, music and dance critics! A nod from people in the business is really the best it gets.”
James F. Ingalls, Dance, L’Allegro for Mark Morris

“The Knight of Illumination Awards are the gold standard. They are the only awards to honour lighting design in all disciplines and at all levels of the industry. Plays, musicals, opera and dance at fringe, regional and national level are judged by people who’ve actually seen the shows.”
Neil Austin, Musical, Parade

“Being an award winner gives you more confidence in your ideas and inspires you to win again. Having a real sword in the house is also always a great talking point at dinner parties!”
Jonny Gaskell, Rock, Groove Armada

“What a marvellous opportunity to meet the names and voices that we know over the phone or from TV credits, theatre programmes and the trade press.”
Mark Smithers, TV Light Entertainment, Mission 2110

“The real buzz is opening the box and taking out the sword for the first time! I opened mine in the crew room at Sadler’s Wells and it was brilliant to see everyone’s faces light up. It then had to be paraded around the stage and shown to the Props and Stage Crew from Birmingham Royal Ballet, all of whom had the same reaction!”
Michael Hulls, Dance, Eonnagata