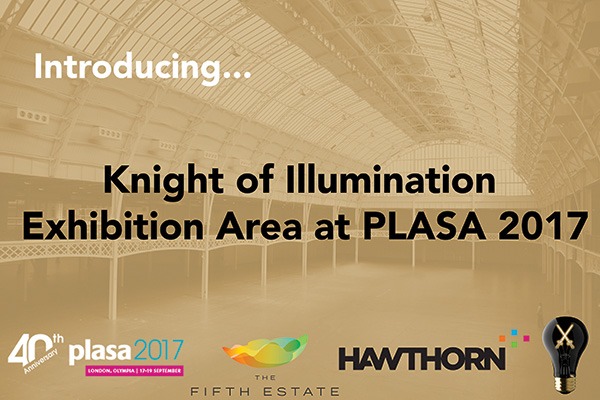 The Knight of Illumination (KOI) Awards – the industry’s largest event to celebrate the achievements in lighting and video design seen in the UK – is delighted to announce a special collaboration between KOI Awards, Hawthorn and the PLASA Show 2017.

This initiative will introduce a new exhibition area to the PLASA show, specifically created to showcase the work of all the designers shortlisted for the 10th annual Knight of Illumination Awards.

The designated KOI area will be located upstairs at the London Olympia exhibition halls on 17-19 September. All visitors to the show are invited to see the showcase of work created by the shortlisted lighting designers. Following Sunday’s ceremony the display will be updated to show the winning designs.

Chris Toulmin, Director of Events at PLASA Events comments: “This collaboration with the KOI Awards enables us to display some of the best creative talents from lighting and video design at the PLASA Show. Much like the KOI Awards, the PLASA Show 2017 is a significant date in the international calendar and lighting has always been one of the cornerstones of the show. It is therefore only fitting that we celebrate the work of the creatives who put this technology to such outstanding use.”

Martin Hawthorn, CEO of Hawthorn adds: “We’ve supported KOI for all ten years and watched the event grow into the most reputable and appreciated event of its kind. We wanted to help increase the reach of the Awards to a broader audience by showcasing the industry’s top design talent from Theatre, Television, Concert Touring & Events to everyone at the PLASA Show.”

KOI Awards coordinators Durham and Jennie Marenghi comment: “Raising the profile and awareness of the excellence of lighting and projected image design seen in the UK is the core principle of the Knight of Illumination Awards. We are delighted to see this showcase and networking opportunity for the nominees at the PLASA event. This is the tenth anniversary of the KOI Awards and thanks to the continued support of headline sponsor Claypaky the event has become a key recognition vehicle for lighting and projected image design skills on display in the UK.”

The KOI Awards ceremony will be presented as part of a glittering dinner on 17 September 2017 at the Eventim Hammersmith Apollo. The PLASA Show – which this year celebrates its 40th anniversary – will return to London’s Olympia on 17-19 September.