HERE YOU ARE THE NOMINEES! KOI 2014 is on track for a sparkling celebration of lighting and video design16 September 2014Next 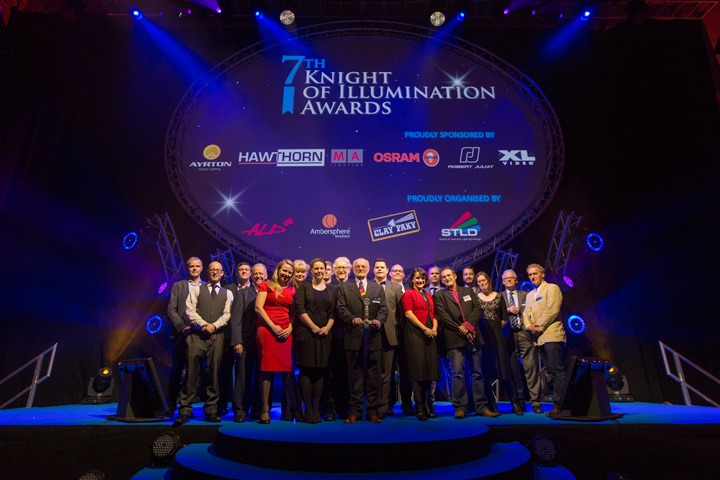 UK – The seventh Knight of Illumination Awards (KOI) was held on Sunday 5th October and once more it was a sparkling success. This year London’s glamorous art deco Troxy saw representatives from the professional entertainment lighting and video industry come together to celebrate the creative achievements of lighting and video professionals working on shows across the UK.

The ever-popular awards, organised by The Society of Television & Lighting Design (STLD), The Association of Lighting Designers (ALD), Clay Paky and Ambersphere Solutions, was established to offer public recognition for outstanding achievements in touring, television and theatre lighting and video design.

Hosted by prolific and popular lighting designer for the theatre, opera and ballet, Mark Jonathan, the winners for each category were announced as follows:

The winner for Lifetime Achievement is Brian Croft

As is tradition, in addition to the TV, Theatre and Concert Touring and Events Awards the Enrico Caironi Award For Lifetime Recognition was presented to an individual whom the KOI committee feels has made an outstanding impact on the industry. This year, the coveted award was presented to Brian Croft who is perhaps best known for his work in Rock and Roll, notably with ESP Lighting, RFA Electrosound, Theatre Projects, Samuelsons, Eagle Trust and Vari-Lite productions but who is also a dedicated supporter of the National Youth Theatre since he began his career as a stage manager on its inaugural production in 1956.

Previous winners of this award include lighting designer Richard Pilbrow in 2011, Bryan Leitch in 2012 and Ian Dow in 2013. The category is named in recognition of former Clay Paky commercial director Enrico Caironi (1947 – 2011), whose inspiration and enthusiasm created and subsequently shaped the Knight Of Illumination Awards.

The Knight Of Illumination Awards has seen main sponsors Ayrton, Hawthorn, MA Lighting, Osram, Robert Juliat, and XL Video all share in KOI’s determination to forge closer ties between the world of lighting design and the lighting industry as a whole.