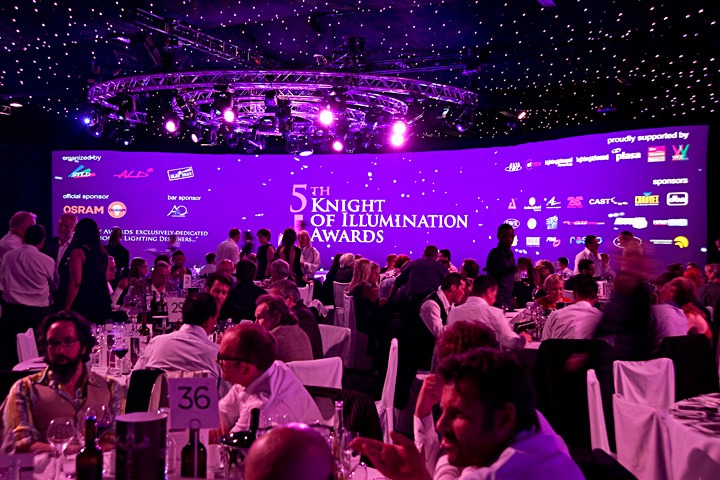 A Sparkling Night Out at the 5th Knight of Illumination Awards

UK – Hundreds of lighting professionals donned their finest outfits and put on their dancing shoes for the fifth Knight of Illumination Awards (KOI), held in London on September 10th.

The popular awards, organised by The Society of Television & Lighting Design (STLD), The Association of Lighting Designers (ALD) and Clay Paky, celebrate the work of lighting designers working in the UK.

The aim: to provide public recognition for outstanding achievements in touring, television and theatre lighting design, and forge closer ties between designers and the industry as a whole.

Hosted by Andy Collins, this year KOI was held at London premier event and exhibition venue, Battersea Evolution. The celebrations attracted a fantastic turn out with over 450 lighting professionals from the worlds of TV, Theatre and Rock. Guests included lighting designers from all disciplines, production companies, trade associations and members of the press.

The awards ceremony kicked off with the TV category and first up was the Drama Award, which went to Roger Simonsz for Antigone 34. The Light Entertainment Award went to Mark Kenyon for Strictly Come Dancing from Wembley; the Small Studio Award, Rob Mansfield for Masterchef and the Live Event Award to Nigel Catmur for The Royal Variety Performance.

In the Rock Awards the Stage Award went to Neil Carson for Chase and Status and the Arena Award to Davy Sherwin for Snow Patrol.

In the Theatre Award category the Dance Award went to David Finn for Sweet Violets for the Royal Ballet; the Opera Award to DM Wood for Suor Angelica at the Royal Opera House; the Drama Award to Howard Harrison for Anna Christie at the Donmar Warehouse and the Musicals Award to Neil Austin for Company, Sheffield Crucible.

The Enrico Caironi Award for Lifetime Achievement Award went to Bryan Leitch and was announced by previous KOI winner (and Leitch protégé), lighting designer Cate Carter who said: “Bryan has been an inspiration to so many lighting designers. He is an incredible talent and his ability to come up with some of the most stunning concepts has never ceased to amaze me! Furthermore he has taken the time to give so many people the opportunity of a career in lighting; taking them under his wing and giving them the support and advice to go out there and do it for themselves.”

Following the awards, there was a short ceremony during which Pasquale Quadri, President of Clay Paky, made a donation to lighting charity Light Relief which was formed to help lighting designers in times of extreme hardship, providing practical support or financial help.

The 2012 Knight of Illumination Awards was chaired by Sarah Rushton-Read for the Rock category, Stuart Gain for TV and David Benedict for the Theatre. The event is generously sponsored by Osram and supported by ABTT, ET Now, L&S America, L&SI, PLASA, The Theatres Trust and Women in Stage Entertainment.

With A&O Lighting Technology as exclusive sponsors of the event bar and after dinner get together, The KOI Awards 2012 proved to be an exciting and fun evening.