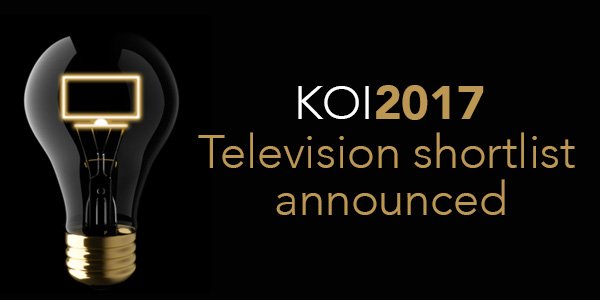 The 2017 Knight of Illumination (KOI) Awards has announced this year’s shortlist of lighting and video designers recognised for their creative work in Television. The winners will be announced at the tenth anniversary KOI Awards ceremony, to be held at London’s Eventim Apollo, Hammersmith, on 17 September.

The KOI Awards was established to publicly celebrate the achievements of lighting and video designers whose work in the sectors of Television, Theatre and Concert Touring & Events has been showcased in the UK in the past 12 months. The event is now one of the most celebrated nights in the live entertainment design industry calendar, with more than 500 industry creatives and professionals in attendance at last year’s celebrations.

The Television shortlist is the second of this year’s three category shortlists to be announced. The nominees are as follows:

THE LIGHT INITIATIVE TELEVISION AWARD FOR EVENTS:
Philip Brines for Proms in the Park, Ben Cracknell for the Olivier Awards broadcast on ITV, and Bernie Davis for BBC1’s Festival of Remembrance

THE GREEN HIPPO TELEVISION AWARD FOR VIDEO GRAPHIC DISPLAY:
Nicholas Reyniers for Tonight at the London Palladium as shown on ITV, Alberta Torres for the BBC’s Let’s Sing and Dance for Comic Relief, and David Newton for Strictly Come Dancing broadcast on BBC1

“The STLD is, as always, delighted to be involved with KOI,” comments Gain. “I’ve been involved with the Awards from 2008, and for me these are the only awards considered and awarded by lighting professionals for lighting professionals. The ceremony is a fantastic occasion and for me, having the job of announcing the winners is a great honour. The KOI Awards has grown enormously over the last ten years and I’m certain it will continue to do so in years to come.”

The prestigious ceremony will take place on 17 September at the iconic Eventim Apollo, Hammersmith, where the KOI 2017 winners’ creative work will be celebrated and recognized in the presence of their colleagues and peers.