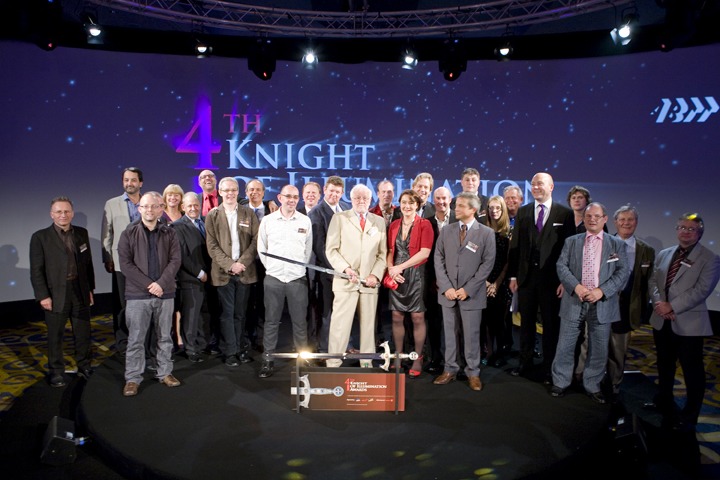 Thank you for some brilliant submissions for this year’s Knight of Illumination Awards!

The organisers of this year’s awards would like to thank everyone who submitted a nomination for best lighting design for Rock&Roll. We’ve had a fantastic array of submissions for Rock lighting design that you think deserves recognition. Submissions are now closed for 2012. Scroll down for details about the awards ceremony and to learn about the judges… And don’t forget to click the ‘Sign Up’ button to subscribe to future KOI information and forward this to your friends!

‘The beauty of the KOI Awards is that we can celebrate rising talent as well as established or well known lighting designers at the same event. At the 2011 Awards, it was very moving to see world-renowned lighting design veteran Richard Pilbrow – a godfather of the art – be presented with a Lifetime Achievement Award. Equally, it’s fantastic that we can highlight some of the amazing work being produced by the younger lighting designers that are making waves in the industry. And, of course, we think the Awards mean even more because it’s up to people within the industry to submit lighting designs that have really impressed them. The Awards really cement the community together and they raise awareness of the great work being done throughout the industry.’

Durham Marenghi has designed the lighting for a wide variety of Theatre, Opera, Dance, Trade, Concert and Television Productions in Britain and throughout the world and most recently designed the lighting for The Queen’s Diamond Jubilee Concert; Durham and his wife Jennie have been promoting and co-ordinating the Knight of Illumination Awards since there inception and he comments “There is no greater praise for one’s work than that received from one’s peers and the Knight of Illumination Awards do this in a way never before achieved in the industry; this is not a competition it is a recognition of great lighting by those who know about that which they speak. Every lighting designer who has received the award has been proud to do so and even the most modest amongst us has recognised the benefit of being honoured in this unique way.”

Steve Moles first loaded a truck for Genesis at High Wycombe College in 1970 and spent the next twenty years trying to escape the music industry. Eventually circa ’91 he found safe haven in writing about it, which at least put some perspective between it and him. ‘In my career I’ve yet to encounter a thoughtless lighting designer; they all strive to enhance and embellish. Music without lighting is like dinner without a plate, the food might be good but the presentation’s rubbish. Awards are due for every good reason.’

(And yes, that is Steve with Tina Turner!)

‘It has been an honour for me to be a judge in the KOI process. I have been involved with moving lights as a technical trainer for many years, but rarely got the chance to see LDs at work unless they were personal friends, or my trainees.

Being a judge has taken me to shows that perhaps would not have been my first choice, but with each one I have been so impressed with the wealth of talent and creativity with which every LD has approached their show. Technology within our industry changes on an almost daily basis, and my involvement with KOI keeps me on the ball, and allows me to make and renew friendships and see new ideas. KOI’s global celebration of lighting design encourages and promotes new techniques and new talent. It’s fast becoming “The event of the year” and the awards are coveted and treasured. Long may this continue.’

‘I’ve been involved with lighting from a young age, from amateur theatre, through drama school, the corporate world and eventually live music. I’ve been with Avolites for nearly three years now, and have met so many talented individuals from across the industry that it’s nice to see their work being recognised. With budgets being cut so often, being able to still appreciate the work that has gone into a design is really important, and I think that’s where KOI comes in – it’s not an award for the biggest, flashiest lightshow, but for work that has a real design ethos behind it and is appropriate to what is on stage.’

I’ve worked as a journalist and photographer since graduating from Sussex University and have also been in the industry since student days. I’ve always been fascinated by visual design in all contexts, and the way emotional experiences can be shaped by exposure to images, lighting, sound, presentation, etc. from music and performance to propaganda to abstract art. The past few years have been a really exciting time for anyone involved in design for live shows as the technology and the imaginations of the designers increasingly unite lighting, video, pixels, IMAG, scenics and automation to make “the show”. As a judge for KOI – and in my day job as a journalist and photographer – it’s fantastic to be able to see so much invention first hand. It’s important that Awards such as KOI continue to raise the profile of these creative individuals and the increasingly diverse work that they do.

(Please note that the ceremony is invite-only)