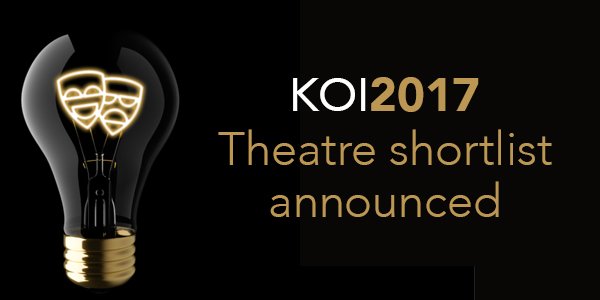 After much deliberation, the Theatre judging panel for the 2017 Knight of Illumination (KOI) Awards has announced this year’s shortlist of lighting and video designers, recognised for their creative work in Theatre. The winners will be announced at the tenth anniversary KOI Awards ceremony, to be held at London’s Eventim Apollo, Hammersmith, on 17 September.

The KOI Awards was established to publicly celebrate the artistic achievements of lighting and video designers whose work has been showcased in the UK in the past 12 months in the sectors of Television, Theatre and Concert Touring & Events. Now one of the most celebrated nights in the live entertainment design industry calendar, KOI attracted more than 500 industry creatives and professionals to last year’s celebrations.

The first of KOI’s three shortlists to be announced, the Theatre judging panel’s shortlist is as follows:

THE ADB THEATRE AWARD FOR PLAYS:
Jon Clark for Amadeus at the National Theatre, Richard Howell for Guards at the Taj at The Bush, and Peter Mumford for The Children at the Royal Court

THE ETC THEATRE AWARD FOR DANCE:
Fabiana Piccioli for Echoes by the Aakash Odedra Company at Curve, Tom Visser for The Royal Ballet’s Flight Pattern at The Royal Opera House, and Alastair West for Northern Ballet’s Casanova at Leeds Grand Theatre

THE PRG XL VIDEO THEATRE AWARD FOR MUSICALS:
Lee Curran for Jesus Christ Superstar at Regent’s Park Open Air Theatre, David Hersey for Fiddler on the Roof at Chichester Festival Theatre, and Joshua Pharo for Removal Men at The Yard

THE HAWTHORN THEATRE AWARD FOR PROJECTION DESIGN:
Lysander Ashton for City of Glass at The Lyric Hammersmith, Ian William Galloway for Hansel and Gretel at Leeds Grand Theatre, and Tal Rosner for 8 Minutes at Sadler’s Wells

THE ROBERT JULIAT THEATRE AWARD FOR OPERA:
Jon Clark for Hamlet at Glyndebourne Festival Opera, Simon Corder for The Queen of Spades at Opera Holland Park, and Bernd Purkrabek for Cosí fan tutte at The Royal Opera House

“The KOI Awards is wonderful in that it rewards those in the earlier stages of their career, as well as the more experienced designers,” says Benedict. “Judging the shortlist is particularly satisfying because unlike most other awards, KOI comes with no outside interference. There are no producers or organisers demanding celebrity winners. Our decisions are based entirely on merit. This year’s deliberations were memorably difficult, with fierce argument about nominees because the achievements of designers’ work across the country are so high.”

Benedict and his fellow judges assessed and debated hundreds of designs seen in the past year, in order to reach their final list of fifteen nominees.

The prestigious ceremony will take place on 17 September at the iconic Eventim Apollo, Hammersmith, where the KOI 2017 winners’ creative work will be celebrated and recognised in the presence of their colleagues and peers.