The 2011 Knight of Illumination Awards Nominations16 August 2011Next 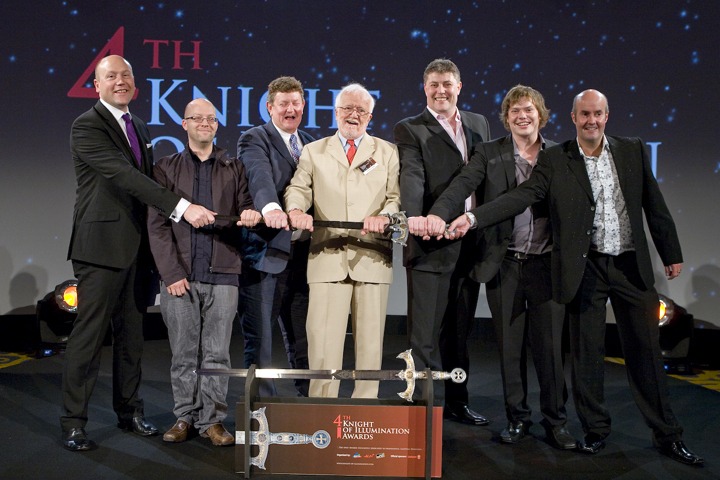 Hundreds of lighting professionals gathered at the fourth Knight of Illumination Awards in London on September 11 to celebrate the work of lighting designers working in the UK. Organised by The Society of Television & Lighting Design (STLD), The Association of Lighting Designers (ALD) and Clay Paky, the Knight of Illumination Awards provide public recognition for outstanding achievements in touring, television and theatre lighting design, and forge closer ties between designers and the industry as a whole.

This year’s winners included Simon Butcher, for the television drama Casualty, Roger Williams for the variety series Tonight’s the Night, Matt Carter for the morning talk show ITV Daybreak, Al Gurdon for the Super Bowl Halftime Show, Michael Straun for the Glasvegas tour, Nick Whitehouse for the last Kylie tour, Jamie Thompson for The Script‘s current tour, Charles Atlas for the dance production Tate Project, Wolfgang Goebbel for the opera Tristan und Isolde, Bruno Poet for the National Theatre production of Frankenstein, and Hugh Vanstone for the West End musical The Wizard of Oz. But the night’s standing ovation went to Richard Pilbrow, whose lifetime as a lighting designer, from the West End in the 1950s to the new National Theatre and beyond, was resoundingly recognised by his peers.

The Lifetime Achievement Award was announced by designer Durham Marenghi, who said Pilbrow had inspired several generations of lighting designers ever since establishing the UK’s first lighting design company in 1957.

Taking to the podium Pilbrow said: ‘we lighting designers have been rather belatedly seeking a little more recognition. When I began, nobody really wanted me at all…’ and added, ‘I must pay my deep regards and thanks to Clay Paky and the other sponsors for taking the lead initiative in this’.

Each winner received the traditional Knight of Illumination trophy, an authentic medieval battle sword handmade in Toledo, Spain. The awards were chaired by Sarah Rushton-Read for the Rock category, Stuart Gain for TV and Mark Jonathan for the Theatre.

The event, held in London’s exclusive Hyde Park Hilton, brought together a high turnout of lighting designers, production companies, trade associations and members of the press. Throughout the evening the ceremony was smoothly directed by suave host and industry veteran Jon Petts of Pulsar Light.

Mark Jonathan of the ALD summed up the importance the awards have achieved for lighting designers: ‘These prestigious awards have helped to raise the profile of lighting design and, if theatre critics weren’t already thinking about the incredible contribution that lighting makes to productions, they certainly are now.’

After the awards, there was a short ceremony during which Pasquale Quadri, President of Clay Paky, made a donation to lighting charity Light Relief. Established by and for the entertainment lighting industry, Light Relief was formed to help lighting designers in times of extreme hardship by providing practical support or financial help. The charity relies entirely on donations from individuals and manufacturers of lighting equipment as well as support from major industry associations.

MUSICALS – Hugh Vanstone for “The Wizard of Oz”

The winner for Lifetime Recognition is Richard Pilbrow